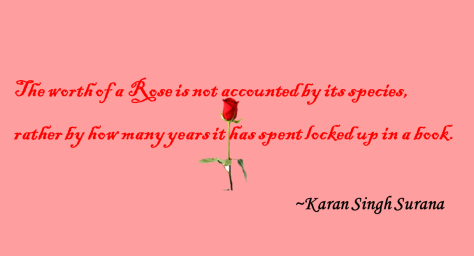 Book Review: all the best, baby

Rating: Two and a half stars

There has been countless tales of campus romance on the Indian market during the past decade since Chetan Bhagat’s Five Point Someone..has changed the way we look at literature or Hinglish for that matter. There are a bevy of authors spurning the tale of love, romance and break up. What makes the authors tick is the connection they make with the audience who identify with the journey, characters, emotions and the entire premise. I believe that romance in college is here to stay and what makes the journey worthwhile is how you narrate your story. When Karan Singh Surana contacted me for the review of ‘all the Best baby’, I willfully agreed since it’s my favorite genre. All The Best…

This time I am posting a quote which I have used in All the best, Baby (my debut novel).

This is amongst my favourite quote and a life lesson.

Today I am nominating the following 3 people:

a. Parker – lets have some fun!

b. Magdalena – Looking for some positive messages.

Rules, as specified, by Swatii

3)Be grateful for the person who nominated.

This is the first time I have been nominated for a challenge and that too by the editor of my debut novel. Thank you Swatii Chandak for nominating me and mentioning ‘Waiting for your quotes!’

I am always excited for new challenges so here I go. My first quote for the 3 day challenge is

After a careful (spelt as Casual) search, I am nominating the following 3 people:

a. Caroline – I am pretty sure you have great quotes to share.

b. Mrirani – coz u r Beauty with brain.

Rules, as specified, by @ayushi

3)Be grateful for the person who nominated <Giggle>

I was in the neighbourhood market to deposit a month old cheque in the bank. It was a hot humid day, thus wearing a simple t-shirt with half pant and sandals was justified. I was walking carefree on the mildly busy dusty road when a trivial juice shop caught my attention.

Observation – Two teenage guys had just ordered juice when an unkempt girl of probably 5 – 6 years walked shyly and stood by their side. Out of the two, one of the slightly over-weight guy asked if she wanted anything. After confirming, he ordered the shopkeeper for another glass of juice.

Isn’t that a nice gesture? I was moved. Without foreseeing any benefit for himself whatsoever, he genuinely offered a glass of juice to a fellow human, whom most of us mistakenly see as ‘Street dwellers’.

“Go away” are the first two words spoken when a street dweller comes near us. We overlook the human aspect and judge them by their clothes. Is that fair?

They don’t judge us before coming near whether we are filthy rich or middle class people, then why do we?

Now the crazy part – #BeingHuman was not printed on his t-shirt nor was he a part of any ‘social experiment’.

For offering a helping hand to fellow human we don’t need to be tagged. All we need is our heart’s to be in the right place.

Stop being #BeingHuman for just the sake of being tagged and Lets Be Human for real.

On a totally separate note – My debut novel All the best, Baby is available on Amazon.

Finally here is the moment….

A book with my name as the author….

Waiting to hold it …